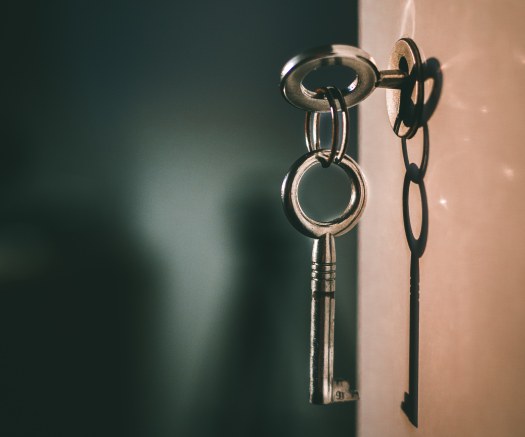 13When Jesus came to the region of Caesarea Philippi, he asked his disciples, “Who do people say that the Son of Man is?”

14“Well,” they replied, “some say John the Baptist, some say Elijah, and others say Jeremiah or one of the other prophets.”

16Simon Peter answered, “You are the Messiah, the Son of the living God.”

17Jesus replied, “You are blessed, Simon son of John, because my Father in heaven has revealed this to you. You did not learn this from any human being. 18Now I say to you that you are Peter, and upon this rock I will build my church, and all the powers of hell will not conquer it. 19And I will give you the keys of the Kingdom of Heaven. Whatever you lock on earth will be locked in heaven, and whatever you open on earth will be opened in heaven.” 20Then he sternly warned them not to tell anyone that he was the Messiah. (Matthew 16:13-20, NLT)

What does it mean when Jesus says He’s giving “the keys of the Kingdom of Heaven” to Peter?

The Catholic view is that Peter is the first Pope and through apostolic succession, the Pope is the leader of the church and the ultimate interpreter and arbiter of church doctrine.

The Evangelical, and I would argue the Biblical view, is that it means that Peter was given a special role in the initial spread of the gospel in that he was uniquely involved in the entrance of all people groups into the Kingdom of Heaven (the church).

In Acts chapter 2, Peter preaches the first mass sermon and many Jewish people believed and were ushered into the church.

In Acts chapter 8, Philip preaches the gospel in Samaria and many believe.

However, Peter (and John) are sent to Samaria to authenticate the conversion of these new believers.

Though these Samaritans had believed, they had not yet received the Holy Spirit, which is the mark of believers who are a part of God’s family (see Ephesians 1.13).

In Acts 10, Peter has a vision that all food is now considered clean. He then is summoned to visit a Gentile named Cornelius.

Peter shares the gospel with Cornelius and his family and they believe the gospel message AND they receive the Holy Spirit, as a sign that their conversion is genuine and God does accept them.

Finally, Peter was instrumental in the first non-Jews (Gentiles) receiving the Holy Spirit and entering the church.

So every people group (Jews, partial Jews and non-Jews) entered the church only when they received the Holy Spirit through Peter’s ministry.

Since that time, all other Jews, partial Jews or non-Jews (Gentiles) who come to faith in Christ immediately receive the Holy Spirit and become members of the family of God.

But Peter had “the keys” to entrance for people at the outset.

What has been your understanding of this passage? How have you interpreted the statement that Peter was given “the keys” to the Kingdom of heaven?

Why do you think it was necessary for Peter to authenticate the receiving of the Holy Spirit for the initial Samaritan and Gentile believers?

How would you answer the question that Jesus asks, “Who do you say that I am?”

Photo by Amol Tyagi on Unsplash