As I read the words on the very first page, I was hooked. David Kinnaman, in his latest book, Faith For Exiles, was describing what it was like to drop his oldest daughter off at college, with all of the emotions that you would expect. Having just dropped our twins off at schools that are 3000 miles away, I could relate to Kinnaman’s fears and anxieties concerning the question of how your child will fare spiritually in this new and secular environment without our guidance. Is their faith strong enough? Have we built the right character into them? Did we do a good job of preparing them spiritually for what lies ahead?

Kinnaman’s 2011 book, You Lost Me, argued that the church has a dropout problem. Research at the time showed that 59% of Young Adults who claimed a faith upbringing had left the church. New research shows the problem has gotten worse, with 64% of Young Adults abandoning the faith of their youth.

What accounts for such a mass exodus? Kinnaman, and his co-author Mark Matlock, argue that our culture is “especially and insidiously faith repellant.” The biggest culprit, they contend, is our smart devices, which have created a digital culture that actually works against us. As a result, believers are swimming upstream, fighting to maintain their values and their faith beliefs in a culture that is becoming increasingly opposed and in some cases hostile to these values and beliefs.

The Old Testament highlights God’s promise that if His people followed Him and worshiped Him alone, they would prosper. But He warned them that if they were disobedient, He would bring judgment in the form of invading armies who would conquer them and take them into captivity. Much of the Old Testament is story after story of the nation of Israel forsaking God to pursue false gods. God continually sends prophets to warn them of impending doom but His message inevitably falls on deaf ears.

God finally hands his people over to the Babylonians, who take the Israelites into exile, where they live for 70 years in a foreign land, amidst a foreign culture that serves foreign gods and does not share their religious and cultural values. In fact, one of the goals of taking a conquered people into captivity was the systematic dismantling and eradication of their culture and the assimilation and adoption of the invading empire’s culture and values.

Imagine what it was like to be a Jew living in Babylon. How hard would it be to resist adopting the culture in which you’re thoroughly steeped, while trying to keep your own faith and religious views alive?

We haven’t been taken into captivity and we’re not living in a foreign land, as the Israelites did, but the authors make the case that the internet age in which we’re living has created what they refer to as “Digital Babylon.” A sobering graphic shows that the average 15-23 year old spends nearly 2800 hours in a typical year engaging with media on their phone. For the average 15-23 year old who is not a Christian, only 153 of those 2800 hours contain ANY kind of spiritual or biblical content. The Christian Young Adult fares only slightly better, with 291 hours of biblical content to offset the nearly 2800 hours of input they’re getting.

Our “smart” devices have created a digital environment that is slowly indoctrinating us to views and values that are contrary to our faith. This is what it means to live in “Digital Babylon”. 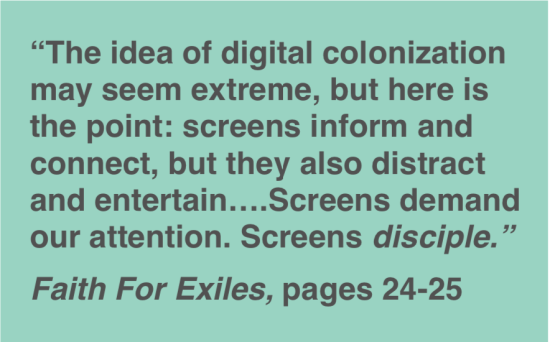 It’s not all bad news though. There is a segment of Young Adults, identified as “resilient disciples” who are thriving spiritually even in this current cultural context. The book is really about the practices of this group that enable them to maintain a vibrant faith. It turns out that we’ve already identified many of these practices as critical to thriving spiritually and as a result, we’ve already implemented many of these practices in our own ministry to Young Adults.

Our prayer is that our influence would increase and the Lord would show us new ways and avenues to impact Young Adults, who are seeking to live as resilient disciples in “Digital Babylon.”

We greatly appreciate your partnership and your prayers as we strive to this end!