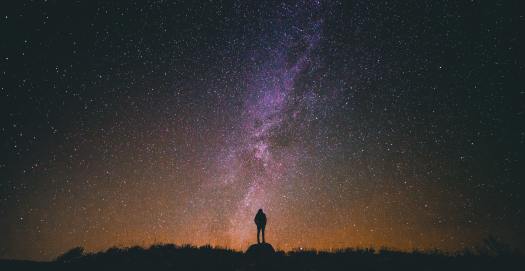 1The heavens tell of the glory of God. The skies display his marvelous craftsmanship.

2Day after day they continue to speak; night after night they make him known.

3They speak without a sound or a word; their voice is silent in the skies;

4yet their message has gone out to all the earth, and their words to all the world. The sun lives in the heavens where God placed it.

5It bursts forth like a radiant bridegroom after his wedding. It rejoices like a great athlete eager to run the race.

6The sun rises at one end of the heavens and follows its course to the other end. Nothing can hide from its heat. (Psalm 19:1-6, NLT)

What does it mean exactly to “follow the science”? What is science?

Science is a method of determining how the natural world around us functions based on repeated observations and experimentation. If you make enough observations, you begin to notice patterns. If a pattern is established, you can develop a hypothesis regarding the natural order of the physical universe. Further observations and testing will either substantiate the hypothesis or refute it.

So to “follow the science” really just means that one should follow the evidence or the data to its logical conclusion.

In Psalm 19, David is following the science. David gazes wonderfully on the celestial beauty in the skies. Based on his own repeated observations and the observations of others over thousands of years, David concludes that the heavens are the result of a magnificent creator. David sees the design of the universe and assumes that it must have a designer. Have you ever seen something that looked designed and assumed that it came into existence without a designer?

Philosophers call this argument the teleological argument for God’s existence, which basically says that because the universe is designed, it must have a designer.

Atheists and skeptics have argued over the years that the universe isn’t really designed, but only appears to be designed. Just because one might attribute elements of design to something they see doesn’t mean it is designed. It could just be a naturally occurring phenomenon. But often, these conclusions, ironically, are not following the science, for they immediately dismiss the most logical and obvious explanation for the world and universe which we observe.

If you walk into Best Buy and see a case full of cell phones, what do you conclude? You conclude that those phones were designed and then manufactured by intelligent people who created them for that purpose.

If you walk onto a car lot, what do you assume about the wide array of vehicles you might decide to purchase? You assume that they were designed by intelligent teams of people who created them for the purpose of transporting people and goods.

Everywhere you go, you see things that are designed and built by people…intelligent people.

Now look at our world, its ecosystems and its incredibly diverse array of animals and plants. Beyond our world is the vastness of space with its trillions of stars and galaxies, all of which we can observe.

Whenever we observe something intricate that has purpose, we assume it has a designer because our experience dictates that intricate, complex systems that have functional purposes are designed by intelligent beings, usually humans.

So why would we look at the earth and the universe and conclude something different?

If we’re following the science, as David did, our conclusion should be the same as his conclusion – that “the heavens declare the glory of God” and “the skies declare his marvelous craftsmanship.”

What has been your experience with scientific observation? What are some science classes you’ve taken and what kinds of things did you observe?

Do you think it’s possible to prove God’s existence “scientifically?” How would you go about it?

What is your understanding of the teleological argument for God’s existence? How would you explain it someone else?

Photo by Greg Rakozy on Unsplash