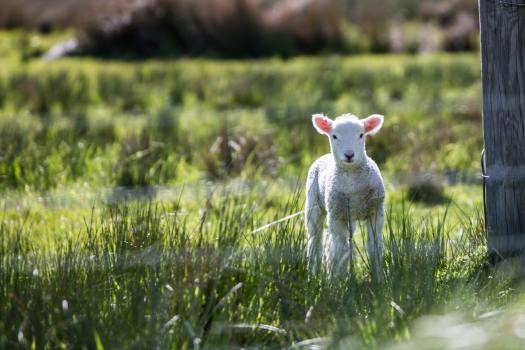 2“Take your son, your only son—yes, Isaac, whom you love so much—and go to the land of Moriah. Sacrifice him there as a burnt offering on one of the mountains, which I will point out to you.”

3The next morning Abraham got up early. He saddled his donkey and took two of his servants with him, along with his son Isaac. Then he chopped wood to build a fire for a burnt offering and set out for the place where God had told him to go. 4On the third day of the journey, Abraham saw the place in the distance. 5“Stay here with the donkey,” Abraham told the young men. “The boy and I will travel a little farther. We will worship there, and then we will come right back.”

6Abraham placed the wood for the burnt offering on Isaac’s shoulders, while he himself carried the knife and the fire. As the two of them went on together, 7Isaac said, “Father?”

“We have the wood and the fire,” said the boy, “but where is the lamb for the sacrifice?”

8“God will provide a lamb, my son,” Abraham answered. And they both went on together.

9When they arrived at the place where God had told Abraham to go, he built an altar and placed the wood on it. Then he tied Isaac up and laid him on the altar over the wood. 10And Abraham took the knife and lifted it up to kill his son as a sacrifice to the LORD. 11At that moment the angel of the LORD shouted to him from heaven, “Abraham! Abraham!”

12“Lay down the knife,” the angel said. “Do not hurt the boy in any way, for now I know that you truly fear God. You have not withheld even your beloved son from me.”

13Then Abraham looked up and saw a ram caught by its horns in a bush. So he took the ram and sacrificed it as a burnt offering on the altar in place of his son. 14Abraham named the place “The LORD Will Provide.” This name has now become a proverb: “On the mountain of the LORD it will be provided.” (Genesis 22:1-14, NLT)

Genesis 22 is one of the most controversial and objectionable passages to critics of Christianity (and Judaism).

The big question people often have from this passage that can cause doubt and skepticism has to do with this: why would God ask Abraham to sacrifice his son? This seems immoral.

The problem with this thinking is that we are looking at it from the vantage point of our modern day morality. We KNOW that it’s wrong to sacrifice your own child. When we see or hear of religious groups or cults that practice this, we cringe in disgust, precisely BECAUSE we know that this is wrong.

But Abraham lived in a different time and a different culture than we do. Earlier in Genesis, we learn that Abraham came out of Ur of Chaldea. In this Ancient Near Eastern culture, child sacrifice was actually quite common as a means of appeasing various regional deities.

So when the Lord asks Abraham to sacrifice his only son, Abraham would not have had the same visceral reaction that we have today. From Abraham’s perspective, this was an expected act of allegiance to the deity.

So why does God do this if it’s wrong?

God does it precisely to show Abraham how different He is from other so-called gods. He asks Abraham to sacrifice his son as a test of faith and loyalty but then He shows Abraham that He is completely different from how the people in that culture perceived deities. Human sacrifice is not His way. God provides a substitute so that Isaac is spared. This encounter also foreshadows the gospel message – we are spared and an innocent lamb, Jesus, is sacrificed in our place.

In our current culture, God does not need to ask us to sacrifice our child to show our loyalty because He has already revealed His nature on this issue.

So if someone claims that God is asking them to sacrifice their child as a test of faith, or for any other reason, we can be certain that it is NOT the Lord who is making the request, but likely the devil himself!

For more on God’s view of human sacrifice as a form of worship and appeasement, see Jeremiah 19:4-5 and  Jeremiah 32:35.

In the past, how have you reconciled or explained this passage to others who object to it as being “immoral”?

What would you say to someone who claims God is asking them to do something that seems to go against Biblical morals and ethics?

What questions or doubts do you have about God’s character or Biblical passages? How can you gain awareness and understanding of those “sticky” passages in order to strengthen your faith?

Photo by Rod Long on Unsplash